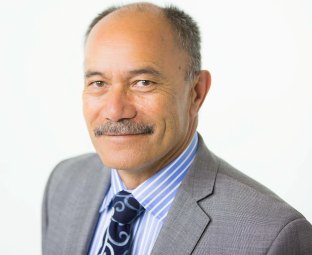 His Excellency The Right Honourable Sir Jerry Mateparae GNZM, QSO, KStJ is the current and 27th New Zealand High Commissioner to the United Kingdom. Prior to his appointment, Sir Jerry served as New Zealand’s 20th Governor General. Previously, he has worked at senior levels in the New Zealand public service and military.
Sir Jerry Mateparae is of Māori descent. His tribal affiliations are to Ngāti Tūwharetoa and Ngāti Kahungunu. He also has links to Tūhoe and tribes in the upper Whanganui. Sir Jerry also has English and Irish ancestry.

Sir Jerry Mateparae received his military education in the UK, Australia and Singapore. He has a Master of Arts with First Class Honours from the University of Waikato, and was recognised by that University as one of its distinguished alumni in 2009. In May 2011, Sir Jerry received an honorary doctorate from Massey University. He is a Fellow of the New Zealand Institute of Management.

Sir Jerry Mateparae was awarded Singapore's highest military award, the Darjah Utama Bakti Cemerlang (Tentera) [Distinguished Service Order (Military)], from the President of Singapore, S R Nathan, in May 2011. In June that year, at Buckingham Palace, he was knighted by Her Majesty Queen Elizabeth II, the Queen of New Zealand as a Grand Knight Companion of the New Zealand Order of Merit.

Sir Jerry is married to Lady Janine Elizabeth Mateparae and they have five children.

You need to login or register to book a place in this event.

Registration is free and only takes a minute. Please note that you must be a NZ passport holder to register as a member of Kiwis in Property but non-Kiwis are most welcome to attend any of our events as a guest of a Kiwi member.